Enter Your Email to Receive Your Top 10 Campervan Hire Tips

We have pulled together one of our favourite trips taking in the wild and open expanses of Exmoor National Park combined with a taste of the beautiful North Devon coastline.

After picking up your camper van from our Southampton depot, loading on all your essential holiday kit, head to Devon to begin your trip from the sseaside town of Sidmouth. A quick trip north from our base gets you onto the North Devon link road to make things simple, getting you to Dulverton on the edge of Exmoor before you know it. For your first stop of your trip, head into Exe Valley Caravan Site. The meticulously looked after site covers 4 acres alongside the Rive Exe, all the pitches provide generous space for pitching. Dogs are allowed on site and there is a specific exercising area for them. For more information check out their website: www.exevalleycamping.co.uk

Waking to the sound of birds, and probably not much else it's time to get the kettle on, grab some breakfast ready for today's adventure. Right on the doorstep is Dulverton, known as the gateway to Exmoor! Named in the Domesday Book, it still has many of the town's medieval characteristics to view. After having a look round and checking out the independent shops and renowned eateries - then Exmoor's famous Tarr Steps is only a few miles away.

As one of the popular destinations in the National Pack, you can park up and take advantage of the facilities before taking a stroll down to the ancient clapper bridge. Running alongside the beautiful River Barle and the heathland of Windford Hill is a manageable circular walk to take in the scenery and visit the Exmoor Ponies.

As the day is progressing, now is the time to take in the expanse of the moor by heading north again across the moor. With much alluring countryside to take in and a few photo opportunities, take your time and stop at your leisure to admire the views. Amble into Lynton late afternoon, famous for the Lynton& Lynmouth Cliff Railway it's definitely not to be missed while you are in North Devon. Badged as “Where Exmoor meets the sea” this place has oodles of character and is akin to stepping back in time. The water powered cliff railway is a must, but once you have traversed down to Lynmouth Harbour, you won't be rushing off! Not too far away, check out Channel View Caravan and Camping Park - as the name infers it has some breath taking sea views!

After another peaceful night and a leisurely breakfast, North Devon's golden sandy beaches are only a short hope down the coast. Take the coast road via Combe Martin and Watermouth Castle for more rugged coastline and breaking waves. On arrival take your choices between; lazing on the beach or riding some waves, a round of golf at Braunton, or take in some more of the countryside with the coastal walks. The shops and cafes in Woolacombe are as laid back and welcoming as you will ever find, so worth a wander...

At the end of the day, why not break up tomorrow's return journey by heading back to Tiverton and the Grand Western Canal. There's an intimate campsite called Minnows Touring Park Situated beside the Gran Western canal the site is conveniently situated in Mid Devon on the outskirts of the market town Tiverton.

Time to have a good breakfast then set off on the final leg of your journey to Sidmouth and back onto Southampton. We hope you've had a great trip and look forward to see you again! 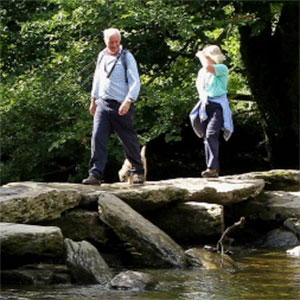 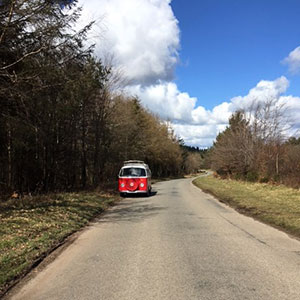 Feefo Reviews
VW Camper Hire has an average rating of 4.9 out of 5, based on 64 customer review(s)
31-12-2022Fantastic trip!"My experience with VW Camper Hire was a very good one. The process of picking up and dropping off the campervan was very smooth. I was showed round th..." Trusted Cutomer
22-11-2022"Great vans, really well kept. Easy to book and up all information needed. Everything you need for either a weekend or a great week away." Victoria Watson
08-11-2022"Very good Service, we hired Buddy for the weekend couldn't recommend VW Camper Hire enough. Buddy was in excellent condition and very clean and the st..." Trusted Cutomer
06-11-2022"Great reception, lovely old van which seemed to bring out the best side of other motorists with toots, smiles and waves." Nicholas Baron
28-10-2022Great holiday in a vintage camper van"We were greeted with a warm welcome and shown how everything worked and provided with everything we needed to enjoy our trip. I would highly recommend..." Paul Rouse
11-10-2022We had a great weekend in Dexter (T5 VW California)."We went across to the Isle of Wight for the weekend which was really easy as the pick up point was 5 minutes from the Red Funnel ferry terminal. Mario..." Paul Dyer
26-09-2022Highly Recommend!!"We hired Buddy for the week and couldn't recommend VW Camper Hire enough. Buddy was in excellent condition and very clean and the staff handover was e..." Trusted Cutomer
24-09-2022"First time we’ve hired a camper-van so didn’t know what to expect. The company was friendly and helpful. We had a fun adventure and would consider..." Trusted Cutomer
20-09-2022Amazing experience for first time campers! Will book to hire again in 2023!"Amazing experience for complete novice's! We have just returned from a week away in Freddie and loved every minute. From our initial enquiry to gettin..." Kevin Gee
Follow us on